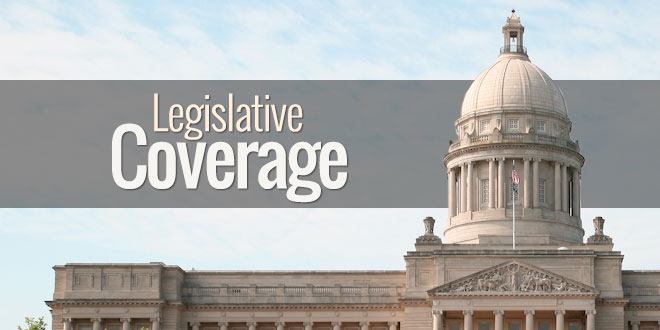 The 2022 Regular Session of the Kentucky General Assembly is officially in the books.  Lawmakers closed out the year by overriding more than two dozen gubernatorial vetoes during a final sprint toward sine die around 9:00 pm EDT last Thursday evening. That capped off an intensive 60 days of work that began in January and resulted in new laws on nearly every prominent issue facing the commonwealth. Education, abortion, redistricting, drugs, gambling, elections, cannabis research and athletics were just a few of the topics that earned a tap from the gavel this year.

Lawmakers revamped the state income tax and passed major overhauls to unemployment benefits and public assistance. They channeled millions in disaster relief to Western Kentucky. They debated nearly all facets of Kentucky’s response to COVID-19 and ultimately voted to end the state’s emergency declaration in March. When counting up the general fund, capital costs and operating expenses, the two-year spending plan totaled an historic $114 billion.

The highlight for the 2022 Session for KRWA was the passage of HB 758 which sets up a Water/Wastewater Assistance Fund and implements the recommendations of the 2019-2020 Task Force that examined the challenges of some of Kentucky’s water/wastewater utilities. HB 758 also clarifies that water associations are defined as governmental agencies allowing water associations to directly enter into assistance agreements with KIA. The Budget Bill, HB 1 included appropriations of $10 million for the water/wastewater assistance fund which can now be used by the Kentucky Infrastructure Authority (KIA) to assist systems with capital and non-capital financial assistance in managerial, debt, or other soft costs assistance. HB 1 also included an additional $250 million in ARPA funding for drinking water and wastewater infrastructure.

When the gavel fell for a final time on Thursday night, legislators had sent more than 240 bills to the governor’s desk this year, and here’s a partial list of some of the most discussed legislation.

Abortion: House Bill 3 bans abortions in Kentucky at 15 weeks of gestation and requires minors to obtain consent from their parents before undergoing the procedure. The omnibus bill also bans online sales of abortion-inducing drugs and regulates the disposal of fetal remains.

Anti-SLAPP bill: House Bill 222 seeks to protect freedom of speech. It would offer those who speak out against a matter of public interest protection from strategic lawsuits against public participation, known as SLAPP lawsuits.

Cannabis research: House Bill 604 establishes the Kentucky Center for Cannabis Research at the University of Kentucky. It also defines the mission and responsibilities for the center and appropriates funding.

Charter schools: House Bill 9 establishes a funding model for charter schools, building on legislation from 2017 that first allowed charters in Kentucky. It also authorizes two pilot charter school projects in Louisville and Northern Kentucky and changes the appeals process if education officials deny an application for a new charter school.

Child abuse: House Bill 263, known as Kami’s Law, makes criminal abuse against a victim under 12 years of age a Class B felony.

Child fatalities: Under Senate Bill 97, law enforcement will be required to request a blood, breath or urine test from parents and caregivers suspected of being under the influence at the time of a suspicious child death. If consent is not given, this bill gives law enforcement the power to request a search warrant.

College athletes: Senate Bill 6 provides a framework in state law for college athletes to generate personal income off their name, image and likeness, known as NIL.

Criminal justice reform: Senate Bill 90 would establish pilot programs in at least 10 Kentucky counties, providing deferred prosecutions, diversion or dismissal of charges for some low-level offenders based on their participation in drug treatment and vocational services.

Death penalty: House Bill 269 adds serious mental illness to the list of disabilities that disqualify offenders from execution – if symptoms were occurring at the time of the offense.

Due process: House Bill 290 calls on state colleges and universities to adopt a student code of conduct for non-academic disciplinary procedures and provide students with due process protections that are similar to those in criminal and civil courts.

Education: Senate Bill 1 calls for local superintendents – rather than school councils – to determine educational curriculum. It also includes language from the Teaching American Principles Act, which would require instruction in social studies to align with a list of core concepts and documents that supporters say are central to American civics.

Election security: Senate Bill 216 seeks to enhance election security through multiple changes in law, including a provision to prevent voting machines from being connected to the internet. It will also increase post-election audits for irregularities.

Felon student aid: Senate Bill 163 would lift restrictions that prevent some felons from accessing state aid for college, including funds from the Kentucky Educational Excellence Scholarship, known as KEES.

Fentanyl: Known as Dalton’s Law, House Bill 215 requires those convicted of trafficking fentanyl, carfentanil or fentanyl derivatives to serve at least 85% of their criminal sentences, up from the current 50%. It also makes importing those drugs from another state or country a Class C felony and deems offenders ineligible for a pretrial diversion.

First responders: Senate Bill 64 aims to protect the confidentiality of first responders who participate in peer support counseling programs. Supporters say it will benefit thousands of public safety workers who frequently experience trauma on the job but could face repercussions from frank discussions in counseling.

Incest: Senate Bill 38 classifies incest as a violent offense. It also ensures that individuals guilty of incest complete at least 80% of their prison sentence.

KSU board: Senate Bill 265 directed the governor to name replacements for the Kentucky State University Board of Regents earlier this month.

Nursing shortages: Senate Bill 10 makes it easier for nurses from outside Kentucky to practice here, helping address major workforce shortages in the profession. It will also remove predetermined numbers for admission to nursing programs.

Pari-mutuel wagering: House Bill 607 will tax every pari-mutuel wager at a standard 1.5% rate, including advance-deposit wagers and bets on simulcasts. It also directs more money to the general fund, makes the Kentucky Racing Commission responsible for self-funding, creates a self-exclusion list for problem gamblers and eliminates the track admissions tax.

Peace officer certifications: House Bill 206 would prohibit anyone convicted of a misdemeanor sexual offense from serving as a peace officer.

Porch pirates: Senate Bill 23 cracks down on people who steal packages off front porches, often referred to as porch pirates. The bill makes it a Class D felony to steal or destroy packages from common carriers and delivery services such as Amazon or FedEx.

Public assistance: House Bill 7 aims to revamp public assistance benefits and combat fraud with new rules around benefit eligibility. It also seeks to increase accountability from the state Cabinet for Health and Family Services and encourage healthy choices for those receiving nutritional assistance.

Redistricting: Lawmakers passed a series of bills in the first week of the session to redraw the boundaries for Kentucky’s congressional, Supreme Court and state legislative districts. The General Assembly must periodically realign the districts to reflect population changes in the U.S. Census.

Religious services: House Bill 43 calls for equal treatment of houses of worship and religious organizations during a state of emergency.

Tax reform: House Bill 8 seeks to gradually reduce and eliminate state taxes on personal income over several years while simultaneously expanding and diversifying the state’s overall tax base. Once state revenue exceeds certain thresholds, the measure will trigger reductions in the income tax rate of half a percentage point, starting with an initial drop in 2023.

Tornado relief: House Bill 5 sends $200 million in aid to communities affected by the December tornados in Western Kentucky. These funds can be used by local governments, nonprofits, school districts and public utilities to pay for construction projects, repairs and more.

Transgender athletes: Senate Bill 83 will prevent male-to-female transgender students from participating in girls’ sports, starting in the sixth grade and continuing through college.

School breakfasts: Senate Bill 151 calls on schools in the Federal School Breakfast Program to offer students up to 15 minutes to eat breakfast during instructional time.

Serving alcohol: House Bill 252 would clear the way for 18-year-olds to sell and serve alcoholic beverages.

Student mental health: House Bill 44 would allow school boards to include provisions in its student attendance policy for excused absences due to a student’s mental or behavioral health status.

Unemployment: House Bill 4 changes the length of unemployment insurance benefits and the job search requirements for recipients. The length of benefits will now be based on the state’s average unemployment rate, and recipients will be required to engage in at least five verifiable work search activities a week.

Vehicle taxes: House Bill 6 calls on property valuation administrators to tax vehicle owners in 2022 the same as they did 2021. Beginning next year, the bill would also require them to use the average trade-in value rather than the “rough” trade-in value or “clean” trade-in value when assessing taxes.

The next regular session of the General Assembly won’t convene until January 2023, but lawmakers will kick off the interim period in June.

Kentuckians can still research bills on the Legislative Record webpage and share their views by calling the General Assembly’s toll-free message line at 1-800-372-7181.

Also, legislators are weighing in on the session, offering their final grades for the year. Check out their remarks on the LRC Capitol Connection YouTube channel.

Kentuckians have many ways to keep in touch with the legislative process, including the Legislative Record webpage, which allows users to review and track a bill’s progression through the chambers. Citizens can also share their views on issues with lawmakers by calling the General Assembly’s toll-free message line at 1-800-372-7181. Citizens with hearing impairments can use the TTY Message Line at (800) 896-0305.

Keeping up with the Legislature has never been easier! The state has updated its Legislative website. From this site, you can view all bills and resolutions, contact legislators, by email and check on legislative committee schedules and calendars. You can reach a legislator in person by calling 502-564-8100 (not toll-free).

Every issue of e-Liaison will contain summary information for each bill that we track with a section that details the most recent activity with the bill. We will continue to highlight timely legislative news that is important to our members in each issue. If you would like to suggest that we add a bill to the e-Liaison for tracking, please contact KRWA. By clicking on the link, you will be taken to the bill summary on the LRC’s website.

The Kentucky Constitution mandates that a regular session be completed no later than April 15 in even-numbered years and March 30 in odd-numbered years.

Is Your Company a Member?

If you are an employee of a KRWA member company, we invite you to set up an online account to:

The members of KRWA invite and encourage you to join! By working together, we can achieve our mission to maintain and enhance our industry as a whole.

All membership applications for KRWA must be approved by the Board of Directors.